Carmen Portero Muñoz is senior Lecturer at the University of Córdoba, Spain, where she obtained a tenured position in 2002. She completed her doctorate in 1997 with a PhD Dissertation with the title Intensification: study of a classeme, supervised by Prof. Kees Hengeveld. Her research is mainly focused on lexical and morphosyntactic issues following functional and cognitive approaches. She has worked within the Functional Discourse Grammar framework (FDG) as well as within the theory of Role and Reference Grammar (RRG). Over the last few years she has participated in a project on the empirical study of conceptual metonymy in grammar and discourse, funded by the Spanish Ministry of Education and Innovation. She has been visiting scholar at different universities, like the University of Amsterdam, the State University of New York at Buffalo and Anglia Ruskin University in Cambridge. 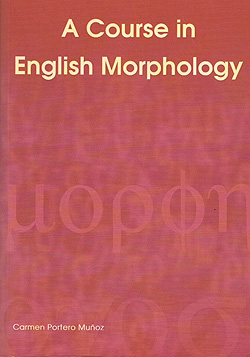 This book is an introduction to morphology, focusing on English. What makes it different from other textbooks concerned with this component of grammar is the integration of theory and practice, the focus on the English language, as well as the eclectic approach taken.
The book is divided into four parts. In Part I, morphology is located within the general field of linguistics, and the basic concepts are introduced. The last chapter of this part draws the distinction between derivation and inflection, the two sub-branches of morphology. Part II is devoted to English derivational morphology. Part III offers a few samples of the work which is being done on different morphological issues in a number of non-formal theoretical frameworks. Finally, in Part IV the focus is on English inflectional morphology.
An advantage of this book is the presentation of deep knowledge on English morphology without the intricacies of specific theoretical models, though concepts are not given in isolation but they are presented in a wider context, so that reference to some of the most relevant theories is made.
A generous number of exercises of various types, all dealing with the English language, is provided at the end of each chapter, once the students are familiarized with the necessary theoretical knowledge.

Portero Muñoz, Carmen (2014) A constructional approach to transitional formatives. The use of –head in so-called ‘exocentric’ formations. Review of Cognitive Linguistics 12 (1): 160–192.